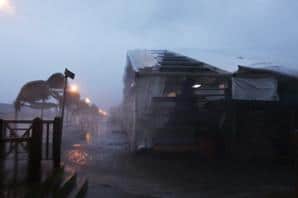 Local paper ‘The Nassau Guardian‘ is reporting that the world- famous Straw Market on Bay Street was partially destroyed by Hurricane Irene among a couple other areas in Nassau, Bahamas.

Many of the local vendors in the straw market had protected their goods in plastic bags but even that couldn’t protect some vendor booths from Hurricane Irene. Luckily there’s a new market being built which is scheduled for completion next month, also on Bay Street.

Popular tourist attraction Senor Frogs also had roof damage and minor flood damage from the rising waters, part of their deck extends out over the water.

The paper also reported at Harbour Central Marina that several boats were damaged and two tug boats broke loose during the storm.

Deputy Prime Minister Brent Symonette told the Guardian that September is generally a slow month so this [storm] is some good news, and some bad.

There’s also reports of debris and fallen power-lines in the area.

The port of Nassau, Bahamas hosts over 2 million cruise passengers annually and 60% of their gross domestic product relies on tourism.

What do you think of Nassau? Share your thought below.