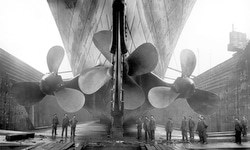 At the time of her maiden and final voyage, 100 years ago today, RMS Titanic was the most advanced vessel of her day. Proud owner White Star Line thought her unsinkable and set out to show the world their new ship. Little did shipbuilders know that the grand ocean liner‘s enduring legacy would not be a new record crossing the Atlantic but a warning to the future. A warning that, while well heeded, could not stop near-tragedies of modern day maritime history.

If you have seen the movie you know the basic story. Four days into a transatlantic crossing, the ship hit an iceberg just before midnight then sank hours later. In one of the deadliest disasters in maritime history, over 1500 people died in the icy water south of the Grand Banks of Newfoundland.

Going down this road, safety at sea rose as a primary topic when thinking of the Titanic and naturally, questions were asked over and over again.

Are today’s cruise lines operating as safely as possible?

Is it possible to ever have another Titanic-like event?

These were ongoing questions asked prior to the grounding of Costa Concordia, the ship that suffered a similar fate off the coast of Italy earlier this year. Today’s shipbuilders stop short of calling ships “unsinkable,” as White Star Line did of Titanic in 1912, but still place a great emphasis on safety. Lessons from Titanic brought plenty of lifeboats on board for everyone and mandatory safety drills so passengers and crew could abandon ships in an orderly manner.

Lessons from Concordia will no doubt leave a similar legacy, not allowing Captains to deviate from planned courses to show off the ship, reaffirming a commitment to safety and looking for new ways to make ships safer.

Shortly after the Concordia grounding,  the global cruise industry announced a new emergency drill policy requiring mandatory muster for embarking passengers prior to departure from port.

The Cruise Lines International Association, European Cruise Council, and the Passenger Shipping Association put forward the new policy with the support of their member cruise lines.

This is probably nothing new to American cruise travelers sailing from North America where safety drills are customarily done before departure anyway.  By international law though, ships were only required to do safety drills within the first 24 hours.  This change addresses the situation that may have contributed to what was reported as “panic” and “mis-communication” on board Costa Concordia as 500-some passengers had just boarded that fateful day and had not received a safety briefing.

“‘The Titanic, name and thing, will stand for a monument and warning to human presumption,” said Edward Stuart Talbot, the Anglican bishop of Winchester, in the sermon he preached the Sunday after Titanic went down.

“When has such a mighty lesson against our confidence and trust in power, machinery, and money been shot through the nation?”

Send this to a friend
Hi, this may be of interest to you: Cruise safety of today thanks Titanic of 100 years ago. This is the link: https://cruiseradio.net/cruise-safety-of-today-thanks-titanic-of-100-years-ago/