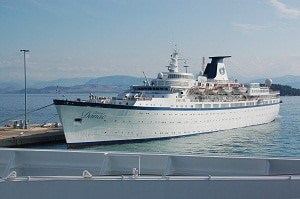 The MV Princess Danae was detained earlier today for not paying a $94,000 outstanding fuel debt, according to the Irish Times. This morning the court system in Dublin, Ireland ordered that the 600-passenger cruise ship be detained under the 1952 International Maritime Convention.

“The convention is an international treaty which authorizes the seizure of vessels for various reasons, including the non-payment of provisions, crew wages and fuel,” said Maritime Attorney Jim Walker.

The Italian-based Omega Bunker SRL wanted the cruise ship detained until they received their money and the transaction was confirmed by officials.

According to the website Marine Tracker, the ship is on the go again, so the debt must have been settled or an agreement was worked out.

Carnival Elation to Sail from New Orleans as Originally Planned