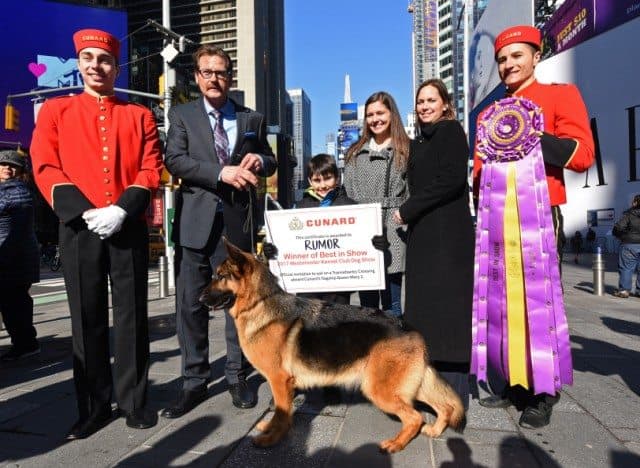 Cunard, a first-time sponsor of the Westminster Kennel Club’s Best in Show competition, presented Rumor, the winner, with an invitation to sail on a transatlantic crossing aboard Queen Mary 2 yesterday in Times Square.  Rumor will be able to take his place in history among celebrity dogs who’ve sailed with Cunard, including Elizabeth Taylor’s pooches and Hollywood film star Rin-Tin-Tin.

The show took place in New York City from February 11 to 14, 2017, and Cunard was the only travel company represented there.  Cunard bellmen offered white gloved “doggie” tea service to canine attendees who stopped by Cunard’s photo booth at the show, including @WallytheWelshCorgi who is quite a popular Instagram dog in New York.  Dogs and their humans took photos in front of a backdrop of Queen Mary 2, and used the hashtag #CunardatWKC. 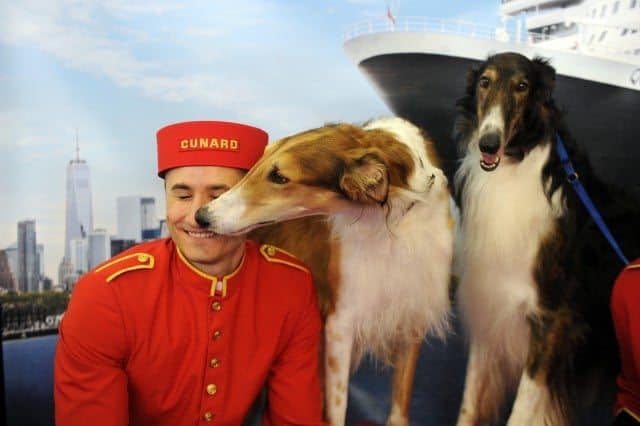 Cunard’s pet-friendly policy dates back 176 years to the maiden voyage of the Britannia in 1840.  They’re the only like to offer dogs and cats passage on their famed transatlantic crossings.  Pet travel is gaining in popularity in the United States, and due to increased demand Cunard doubled the size of its onboard kennels during Queen Mary 2‘s recent renovation.  To learn more about the ship’s revitalization, click here.