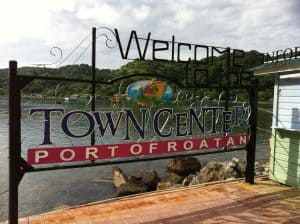 I ventured out to where a lot of people are afraid to go and I can kind of see why. You are safe in the port gates but once you step outside those gates you’re on your own. When you walk out of the port you walk into a little tiny village and it’s bustling with locals wanting to sell you their wares. I won’t lie, I was a little nervous walking through the village with my laptop but I met a nice local named Sam who helped me. He brought me to the ATM (where local currency was given), a bank to convert the local currency into USD, and a bar called Fonsie’s with great frozen concoctions and free wifi.

After spending time in the local village I didn’t feel threatened at all. I gave my new local friend Sam a tip for helping me out (and basically being my body guard). The port of Mahogany Bay (~4 miles down the road) is where we were aboard Carnival Liberty and though it’s new and nice, it lacks village charm.

Dinner again was nothing short of amazing. I went with basic American menu: tomato and buffalo mozzarella, ceaser salad, beef w/ brown sauce, and a cheese plate. The service in the dining room has improved significantly since we sailed last year. A lot of the servers last year were cold but the seem to be warming up to the guest now. The drink service is slowly getting better. It’s taking me a while to get used to the no ice in the cups thing but if that’s the worst thing so far, I’m not doing to bad. 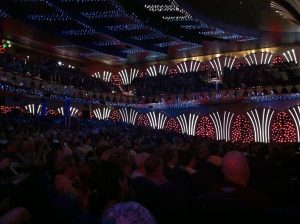 After dinner they had a welcome show in the theater called SAM. The show paid tribute to the United States, a tour through America’s music history. A few of the skits were lip synced but I respect their production value, lasers, big screen TV’s, and beautiful theater. They hands down have one of the nicest theaters at sea (IMHO).

There was a “Tropical Party under the Stars.” The party had dancing with the visual performers and different dancers from around the world. It looked like the whole ship was out there. Afterwards I went down to the Zebra Bar (they were serving cold cuts and I was starved). It figures the only night I was starved they didn’t have a midnight buffet. The early dining is making me hungry later in the evening.

I ventured up to the S32 disco last night and was impressed. It’s on deck 14 aft and they have a wrap around area where you can go outside. They were playing Top 40 and a decent late-night crowd.

Tomorrow is a day at sea and I have some staff interviews. I want to try lunch in the main dining room as well as the navigational talk in the morning.