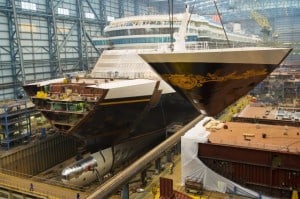 PAPENBURG, GERMANY (Sept. 3, 2011) — The final building block for the newest Disney Cruise Line ship, the Disney Fantasy, was placed today at the Meyer Werft shipyard signaling completion of a major milestone in the ship’s overall construction.  The final block placed was a 265-ton portion of the ship’s bow, complete with the signature Disney Cruise Line golden filigree.

The Disney Fantasy will bring to life many of the innovative features guests love on the recently launched Disney Dream including AquaDuck — the world’s first shipboard water coaster.  But new design elements and guest experiences will give the Fantasy an identity all its own.  Some of the new highlights found on the Disney Fantasy include:

The Disney Fantasy will sail alternating seven-night cruises from Port Canaveral, Fla. to the Eastern and Western Caribbean and Disney’s private island, Castaway Cay with the maiden voyage scheduled for March 31, 2012.