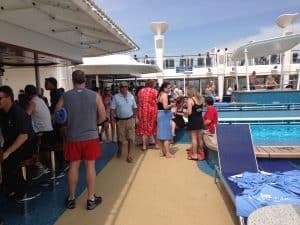 A listener email sparked a good question this morning. The writer was talking about her last cruise experience and how the passengers were acting and their lack of manners. What was even more shocking is the cruise line she sailed wasn’t your typical mass market line – it was a higher scale cruise line.

Here are some of the things she noticed:

People bum rush elevators like there’s no tomorrow; having a total disregard for people exiting the elevator and only worry about trying to rush to get in. Or, you have the people who try to squeeze one more person in the elevator, like another one won’t come around until tomorrow.

Then there’s the guy wearing just a tank top and having no concern for others’ health – reaching over the food and exposing their underarm hair all over the food selection.

4. Blocking with a Cane

I actually saw this on a Holland America sailing, no joke. There was an older gentleman who was jockeying his way into the main show theater, and he was putting his cane out to anyone that was passing him.

The people who get out really early, scatter their towels on the sun chairs, and then leave for a couple of hours. Uncalled-for behavior and some cruise lines are even doing their part to stomp those kind of people out. See the video below.

These are just some of the behaviors experienced; I’m sure a whole sociological case study could be done on cruise behavior.

What annoying or disrespectful behavior have you observed on your past cruises?

5 Things to Expect at the Cruise Pier