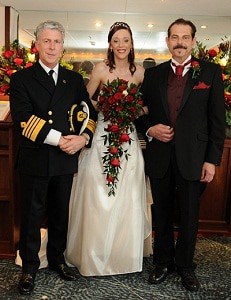 The happy couple with the master of Queen Mary 2. (photo: Cunard)

On 30 April 2012, Dr. William DeLuca became the first American to wed aboard Cunard Line’s flagship Queen Mary 2 since the company unveiled its Weddings Program in April. DeLuca, an anesthesiologist from Massachusetts met British executive chef Kelly Lewis one year ago while visiting England. Unable to decide between marrying in the U.S. or U.K., the couple chose to wed halfway between the two during a Transatlantic Crossing aboard Queen Mary 2.

Both first-time cruisers, the DeLucas were delighted to blow the ship’s noon whistle with Captain Oprey, enjoyed a tableside serenade by the servers in the Britannia Restaurant while cutting their wedding cake, and celebrated their first dance in the Queens Room that evening. During the rest of their voyage, they spent time engaging in Queen Mary 2’s many leisurely pursuits and particularly enjoyed the vast library and Illuminations, the only planetarium at sea.

Cunard’s Wedding Package starts from $2500 and includes the ceremony conducted by the Captain, traditional wedding music, a White Star Bellman escorting the bride, floral arrangements, Veuve Clicquot Champagne and, of course, the wedding cake as well as priority check-in and luggage delivery.

To maintain exclusivity, only one wedding is arranged per day, at either 11:00 a.m. or 3:30 p.m., and the ceremonies take place only during days at sea. Couples wishing to wed at sea can choose from the full spectrum of Cunard’s worldwide voyages lasting seven nights or more.

After 171 years, the cruise line start wedding ceremonies at sea.