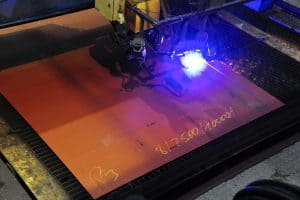 The ship's steel being cut with a plasma torch in Germany.

The first steel was cut today at Meyer Werft shipyard in Papenburg, Germany to start construction on Norwegian Cruise Line’s first “Project Breakway” ship. The steel, which took 4-minutes to cut with a plasma torch, marks the beginning of two new-builds for the company.

“Today’s steel cutting marks the start of construction for Norwegian Breakaway, our next generation Freestyle Cruising ship, that will captivate and amaze our guests,” said Kevin Sheehan, Norwegian’s chief executive officer.  “We are extremely pleased with the progress we have made so far in planning this incredible vessel. We now look to the capable and talented team at MEYER WERFT to bring this ship to life.”

The Breakaway class ships, Norwegian Breakaway and Norwegian Getaway, will each be 144,017 gross tons and will have approximately 4,000 passenger berths.

The two ships were named in a contest in conjunction with national newspaper USA Today.