While several of the ships impacted by the heavy fogs which hit the port of Galveston, Texas over the weekend are finally out to sea, the weather’s impact is still being felt by passengers aboard at least one Carnival ship.

In case you missed it, the heavier-than-usual fog caused several ships to remain anchored in Galveston, resulting in itinerary changes for several lines as they waited for the all-clear.

Which Ships Were Grounded? 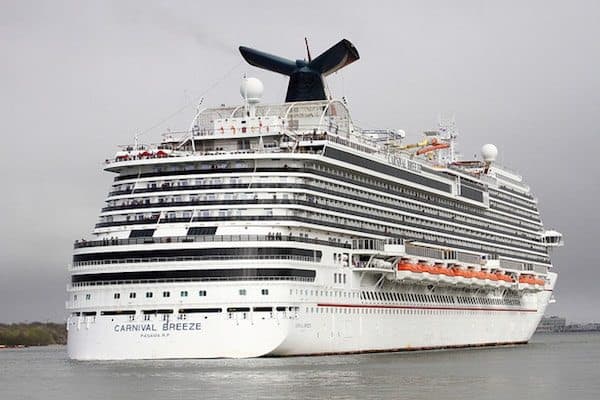 The Valor was scheduled to arrive on Saturday but didn’t actually sail into the port until Sunday. Although they were slated to then set sail on a five-night trip, the itinerary was changed to a four-night voyage to Cozumel and Progresso.

Guests who chose to sail on the modified itinerary received a one-day prorated refund. Guests also had the option of canceling without penalty.

The Freedom, which was originally scheduled to dock on Saturday, wound up seeking temporary shelter at a cargo pier before eventually moving to one designed for passenger ships. Her original seven-night sailing was changed to a six-night trip, with the stop in Ocho Rios, Jamaica, being canceled.

Guests who opted to sail on the modified itinerary will receive a one-day pro-rated refund. Guests also had the option of canceling without penalty.

The Breeze is, as we write this, still docked in Galveston. The ship is scheduled to depart today on its next cruise, which has been modified to a six-day voyage with stops in Mahogany Bay, Roatan and Cozumel, Mexico. Though originally slated to stop in Belize, that port will be skipped in order to get the Breeze back on schedule.

As with the other sailings, guests who choose to sail on the modified itinerary will receive a one-day pro-rated refund. Guests also have the option of canceling without penalty.

Have you ever had your itinerary changed because of a heavy fog? How did the cruise line make good on the change?

Send this to a friend
Hi, this may be of interest to you: Fog Impacts Three Carnival Ships. This is the link: https://cruiseradio.net/fog-impacts-three-carnival-ships/