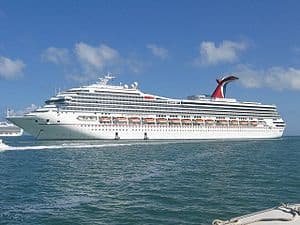 The time has come for the next cruise, a five-night Canada/New England sailing from Boston on Carnival Glory. Now I won’t lie, I have always thought that Canada was only an old people destination but boy was I wrong! After spending a few days in Quebec City and Montreal last month, I learned Canada is anything but that.

The ship we’ll be traveling on is Carnival Glory, a 2,974-guest ship that’s spending this summer and next in Boston, doing four-and five-night sailings. She’s a Conquest-class vessel, being the same as Carnival Conquest, Carnival Liberty, Carnival Valor and Carnival Freedom.

This November she will go in for the Fun Ship 2.0 dry-dock, so as of right now she’s still the same ship that was launched in 2003.

July 7th – Board at the Black Falcon Cruise Terminal in Boston, depart 5pm

We already checked the weather out and it looks like it’s going to be highs around 70 and lows around 55, so I’m ready for the chilly weather. The bank signs in Jacksonville have been reading around 100 degrees for the past week, a cool change is going to be nice.

I have a pre-night arranged at the Hyatt Regency that I booked on Priceline earlier today. We will let you know if it stands up to the price (the rack rate is around $269), seems kinda high-brow!

Carnival Glory: Getting to Boston