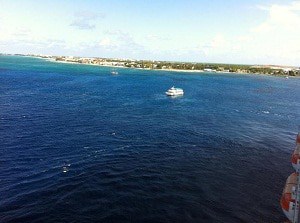 Grand Cayman is known for being a tender port and often being skipped as a port of call due to inclement weather, for that reason it’s not rated highly on the customer satisfaction surveys from the cruise lines.

This past week an open statement was published in a local Grand Cayman publication making a case for a cruise pier.

“We are behind Cozumel, ports in Jamaica and even Haiti.  The new much larger cruise ships, carrying in excess of 6,000 passengers, have to sail past as it is not feasible to ferry those large numbers by tender,” said project manager Alastair Paterson.

I asked a local if he thought Grand Cayman would benefit by having a cruise pier? He replied, “hell yes.”

Grand Cayman hit an all-time record of cruise passengers in 2006 with 1.9 million and since then decreasing in 2011 to 1.4 million.

Will they ever get that cruise pier? The jury’s still out but it sure wouldn’t hurt.