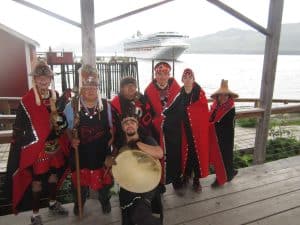 Princess Cruises’ Grand Princess made its inaugural call on Alaska Native-owned cruise ship destination, Icy Strait Point, on July 3. The Grand Princess has been repositioned to San Francisco and is sailing on 10-day cruise itineraries to Alaska this season.

The ship was greeted at Icy Strait Point, owned and operated by Huna Totem Corporation, with much anticipation by staff and locals alike. Huna Totem Corporation’s board member Earnest Jack presented the Grand Princess Staff Captain Michele Bartolomei with a plaque, featuring Icy Strait Point’s Tlingit-style logo, a salmon-inspired paddle design. In the Tlingit culture, paddles are given to visitors as an invitation to return. Icy Strait Point is based on the site of a 1912 historic salmon cannery and shares the area’s fishing and canning history as well as the Tlingit culture with visitors.

In 2013, six cruise lines will make 69 ship calls and bring about 135,000 travelers to Icy Strait Point. Icy Strait Point is a wholly owned and operated subsidiary of Huna Totem Corporation, the village corporation owned by approximately 1,350 Alaska Natives with aboriginal ties to Hoonah and the Glacier Bay area.