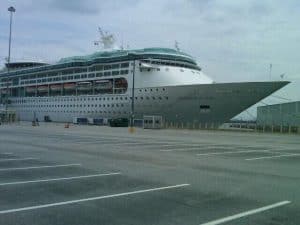 Royal Caribbean’s Grandeur of the Seas is back in Baltimore after being out of commission for six weeks due to a fire on the aft part of the ship. The ship isn’t back to 100-percent yet.

According to Cruise Critic,  guests in 78 staterooms from the July 12 sailing have been bumped because the rooms are not yet complete. The guests that were bumped received a 25-percent discount off a future cruise and a full refund. A spokesman for the company said that the ship is expected to be fully complete by the July 19 sailing.

Hear our interview with a passenger who was aboard the sailing in late May when Grandeur of the Seas caught fire. No one was injured.

Journalists onboard have been tweeting photos of the ship and it looks good as new from the outside.

The cause of the ship’s fire is still under investigation.