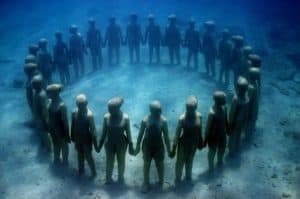 Grenada’s Underwater Sculpture Park and the statues created by Jason deCaires Taylor were featured in a special edition National Geographic magazine entitled “Wonders of the World – Earth’s most awesome places.”

Compiling photographs in the categories of air, earth and sea, Grenada’s underwater statues are in good company appearing amongst household names such as the Great Barrier Reef in Australia and Machu Picchu, Peru.

The prominence of a small, but evolving underwater park in Moliniere Bay on Grenada’s west coast has received phenomenal recognition for both the island and the British sculptor.

“To be acknowledged by a magazine as significant as the National Geographic is fantastic,” states Grenada Underwater Sculpture Park Management Group Chairman, Howard Clarke. “The Underwater Park is the world’s first such attraction and it has become a large and important part of our tourism product attracting snorkelers and divers from all over the world to see it. To have a unique attraction is immensely important but to have recognition like this is truly remarkable.”

Commenting on this recognition, artist Jason deCaires Taylor, stated, “I feel very proud that my sculptures have been featured in National Geographic’s Wonders of the world and are compared to other locations that have taken millions of years to evolve and entire civilizations to create. I also think it is a wonderful tribute to Grenada’s natural beauty and its rich diverse culture.”

The sculpture park includes various installations at a maximum depth of 8 meters (26 feet) on which sponges and other sea life have colonized the surfaces of many of the sculptures including his most widely acclaimed piece Vicissitudes, a ring of 26 children holding hands and facing into the current.

Send this to a friend
Hi, this may be of interest to you: Grenada cruise excursion makes National Geographic 'Most Awesome Places' list. This is the link: https://cruiseradio.net/grenada-cruise-excursion-makes-national-geographic-most-awesome-places-list/