Multi-platinum selling band DNCE set sail aboard Royal Caribbean’s Harmony of the Seas for the Ultimate Friendsgiving.  The ship recently arrived in her new homeport of Port Everglades, and is operating year-round to the Caribbean.

As part of the festivities, DNCE frontman Joe Jonas (of Jonas Brothers fame) and his bandmates treated a ship filled with new friends to a sunset concert with songs such as “Pay My Rent,” “Toothbrush,” and “Body Moves,” from their self-titled album DNCE.  The performance took place in the ship’s AquaTheater, an open-air amphitheater at the back of this ship overlooking the ocean. 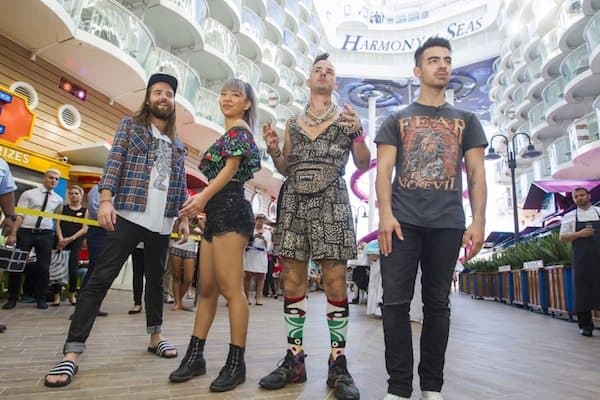 While onboard, the band took a ride down the Ultimate Abyss slide, tried out the zip line, and sipped cocktails made from the robots Mix and Mingle in the Bionic Bar.  They also surprised lucky fans with a Friendsgiving get-together, featuring a massive ‘cake by the ocean,’ and took a ride on the ship’s hand-carved carousel in the Boardwalk.

Friendsgiving aboard the ship was taken to the ultimate level, with custom Friendsgiving menus, cocktails, and entertainment.  Guests were treated to a feast that put a fresh spin on some tradition Thanksgiving fare, including pumpkin soup with crispy pancetta, turkey empanadas, crispy chicken with fresh cranberry sauce, sweet potato fries, and a variety of classic desserts.  The celebration was topped off with a signature cocktail, dubbed the Amiga Margarita, and a toast by DNCE.

DNCE won “Best New Artist” this year at the MTV Video Music Awards, and first introduced themselves to audiences around the world with their debut single “Cake by the Ocean.”

Learn more about Harmony of the Seas by taking a look at some photos here!