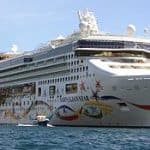 Strong winds are to blame as the 2,348-guest Norwegian Star broke free from its moorings at the west end of Bermuda on Friday, making contact with Royal Caribbean’s Explorer of the Seas, this first reported by Cruise Critic.

A Norwegian spokesperson said, “At approximately 1:30pm ET today, a high wind squall caused Norwegian Star’s aft mooring lines to break while the ship was docked in Bermuda. There were no injuries, and after a short time of being at anchor, the ship re-docked alongside at the pier.”

Norwegian Star is on a seven-night Bermuda sailing from New York and is expected to return on Sunday.