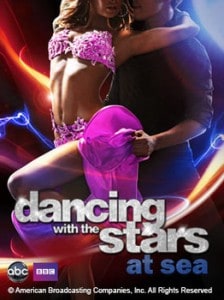 The theme cruises on select ships are part of the line’s recently announced “Dancing with the Stars: At Sea” on-board experience that also features an exclusive “Dancing with the Stars” program on all ships in the fleet including dance lessons and an opportunity to dance center stage in a live dance-off performance. These activities will showcase the ships’ professional dancers and will be developed in collaboration with the show’s dancers and choreographers.

The six theme cruises in 2013 and early 2014 will feature “Dancing with the Stars: At Sea” events including dance lessons, a chance to meet the dancers, ask questions and take photos, and a dazzling production starring the celebrities and famed dance pros, complete with glamorous costumes and routines from the TV show. Performers are subject to change.

Chelsie Hightower and Mark Ballas are scheduled to sail Jun. 22, 2013, on ms Veendam’s seven-day Canada and New England voyage. Celebrities to be announced.

Kym Johnson and Tristan MacManus are scheduled to sail on ms Oosterdam’s Jun. 30 and Jul. 7, 2013, seven-day Alaska cruises along with celebrity Carson Kressley. Additional celebrity to be announced.

2014 “Dancing with the Stars: At Sea” theme cruises are on board ms Nieuw Amsterdam Jan. 5 for a seven-day Eastern Caribbean sailing and Jan. 12 seven-day Western Caribbean cruise. Celebrities to be announced.