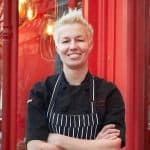 Holland America Line announced this week that they are adding another chef to their acclaimed Culinary Council, Chef Elizabeth Falkner. Falkner’s focus will be to enhance appetizers and main courses for the line’s menus, in addition to offering her guidance to the line’s culinary program.

A San Francisco, Calif., native, Falkner began her career working for Julian Serrano at Masa’s, a four-star French restaurant and later for Traci Des Jardins at Rubicon. She then started her own business as chef and a managing partner for two Michelin-recommended restaurants: first at Citizen Cake and then at her second restaurant, Orson. Falkner is known as a pioneer and expert in many types of cuisines.