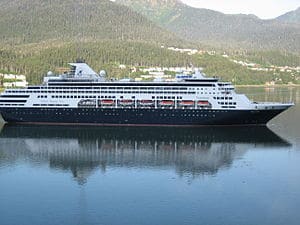 Dignitaries in Quebec are proud to announce that an agreement has been reached with Holland America Line to significantly increase summer cruise ship traffic on the St. Lawrence River. Using the ms Veendam, the company plans to add at least eight turnaround operations in Quebec City during the summer over a three-year period beginning in 2013.

The Veendam’s arrival will be highly strategic in terms of developing Quebec City’s cruise ship sector. The potential increase in passenger traffic (more than 20,000 extra visitors per year) is sure to have a major impact. In this regard, the agreement confirms that Holland America’s entire fleet will be redeployed on the St. Lawrence in 2013.

A large-scale promotional campaign will also be undertaken with a view to positioning Quebec City and eight other St. Lawrence ports within the international cruise ship circuit.

“The initiative we are announcing today closely ties in with our vision and will help broaden Quebec City’s international outlook. I would like to thank Holland America Line for its commitment to opening up the local market.,” said Ms. Maltais, Minister of Labor for Quebec.

Each cruise passenger in Quebec is reported to spend an average of $329.