Holland America Line celebrated the delivery of their latest ship, ms Koningsdam, today at the Fincantieri shipyard in Italy.  The official Handover Ceremony included a luncheon and workers party aboard the ship.

Italy’s Minister of Infrastructures and Transport, Graziano Delrio, was in attendance, and expressed his appreciation for the long-standing relationship with Carnival Corporation and Fincantieri.  Other speakers included the CEO of Fincantieri, Giuseppe Bono, and CEO of Carnival, Arnold Donald.  A video was shown of the Italian flag being switched to the Dutch flag, which all Holland America ships fly.  The shipyard also presented the ship’s captain, Emiel de Vries, with a bottle holding the first water that touched ms Koningsdam‘s hull. 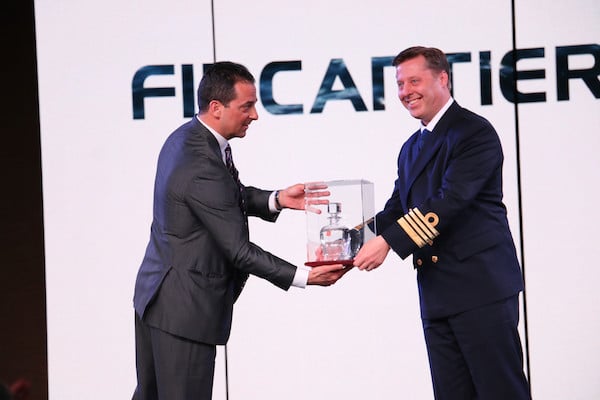 Guests at the ceremony also were able to watch as a contract was signed between Carnival Corporation and Fincantieri for five more ships as part of an agreement announced last year.  Two will be built for Costa Asia, two for Princess Cruises, and one for P&O Cruises Australia, with deliveries scheduled for 2019 and 2020.

The ship will leave the yard tomorrow, April 3, to make its way to Rome for her Premiere Voyage that will depart April 8.  After a series of Mediterranean cruises, the naming ceremony will take place in Rotterdam, the Netherlands, on May 20.

Send this to a friend
Hi, this may be of interest to you: Holland America Celebrates Koningsdam with a Ceremony. This is the link: https://cruiseradio.net/holland-america-celebrates-koningsdam-handover-ceremony/