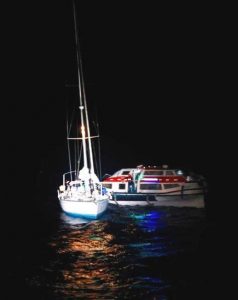 On Saturday, May 4, at 6:50 p.m. (UTC-2), ms Nieuw Amsterdam received a call from the U.S. Coast Guard Rescue Coordination Center at Norfolk, Va., regarding a mayday signal it had received from sailing yacht Embla, which was disabled and adrift. Nieuw Amsterdam immediately diverted from its course and arrived on the scene at 9 p.m. local time.

The cruise liner then initiated rescue of the sailboat’s crew, two males ages 29 and 61. The men were taken aboard Nieuw Amsterdam following a security check and provided food and accommodations. They will disembark in the next port of call at the Azores.