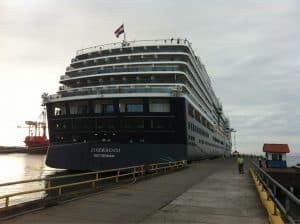 It will be no surprise when I tell you that my morning started really early again. We were scheduled to dock in Costa Rica at 6:30a but the actual was about 7. There was a couple of things I had to upload before we did our white-water rafting excursion so I went looking for an internet café on land. Puerto Limon, Costa Rica reminds me of San Juan, Puerto Rico. The town was a far cry from all the other ports we have visited so far and you can tell there’s not a lot of money in the town. The local currency is the Costa Rican colon, the conversion is 1 USD is 512 Costa Rican Colons. The official language is Spanish.

*Tip: Bring plenty of $1’s and $5’s on your cruise, getting change can be a real pain or they give you back local currency. If you’re using a $20 somewhere, forget about it.

I had an hour to burn so I went to look for an internet café. I found one right across the street from the pier but when I talked to the people in the shop, they basically shooed me out and told me to come back at 8am. Okay, if I owned a business and there were customers that came in an hour early, I’d definitely let them in. Maybe life is just that good down there that they can turn away customers though. Love the fact that when I get off the ship, I always have my laptop bag so the locals never bother me, they think I’m crew.

We met again in the Vista Theater at 8:20 to start our white-water rafting journey. From there, we got our numbers, picked up our towels at the gangway, and made our way to the pier and walked to our busses. It took about an hour to get to the rafting destination because of slow traffic. I think it’s about 45-miles or so each way. Once we got there we did a safety briefing, got our gear, and paired off into eight people in five different boats. We were on our way. We went over some class one, two, and three rapids and then about two hours later we were back on land. The starting point looked the same exact as the ending point so I asked the guide if we did a big circle, turns out he didn’t think that was too funny. 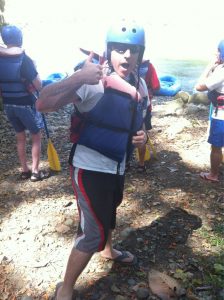 Doug geared up and ready to white water raft.

Heading back to the port took about another hour and then we had exactly one  hour and ten minutes to figure out what we were going to do before getting back on the ship. I went to the internet café to upload some pictures from my phone. The café said Internet in big letters and was $5 an hour to use their wifi.

The ship was actually an hour late leaving today because an excursion was late getting back. That’s another reason it’s a great idea to book your excursions through the ship – they won’t leave you if it runs over. This one lady on the lido deck came up to me and all  fired up because she said it was 4:30 and we haven’t left yet, well her clock was still in eastern time when we were in fact in central time. She told me sorry and she felt really stupid.

The sail away was pretty basic. We found the liquor package on the ship and ordered that to enjoy sail away. It was a bottle of Jim Beam and three cokes, it ran $34 but with the service fee it was more like $39. We learned about this from the folks on our white water rafting excursion.

Dinner tonight was in Le Cirque, a menu replicating Le Cirque in New York City and held in the Pinnacle Grill. I started off with Lobster Le Cique, Huckleberry and Squash soup, and crab cakes for my entrée. There‘s an up charge for this venue of $39 and $59 for the wine pairings. I had no clue what Le Cirque was, actually I thought it was a acrobatics show so it was just like regular food to me but good regular good. You can see the ‘Night at Le Cirque’ menu here.

The comedian tonight was funny. His name was Lee Bayless and he did two shows: 8p & 10p. It was a clean show but he made it humorous. I can appreciate when a comedian doesn’t have to drop an F bomb just to make people laugh.

The internet café had some type of happy hour going on where when you log in between 7-9pm were you were able to get half price minutes. Since minutes are at .75 per minute, half price wasn’t that bad. I always hold off for the last day of the cruise, that’s when the internet deals start flying off the shelves.

Tomorrow starts are days at sea. We have two of them back to back before getting back into Fort Lauderdale.

‘Night at the Le Cirque’ menu aboard Holland America