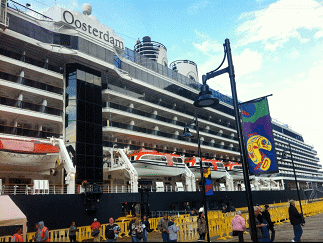 WOCLS is composed of thousands of experienced cruisers who take an average of two cruises a year. The society reviews all cruise lines annually, and in its monthly Ocean & Cruise News publication noted, “One of the main reasons Holland America Line continues to capture our yearly honor for the best overall value in cruises is that it puts forth an extra effort to offer a number of features that other cruise lines believe are not necessary or too costly to provide.”

WOCLS cited Holland America Line’s “. . .upgrades, the impeccable appearance of its ships and its friendly Indonesian and Filipino crew, the extra effort to properly train and supervise its staff, the more extensive choice of dinner menus in its restaurant, alternate restaurant and lido and all little extras such as canvas tote bags, hot hors d’oeuvres at cocktail time, chilled beer glasses, a no-charge ice cream bar and later lunch hours when in port,” as contributing factors to the line’s selection as Best Overall Cruise Value of 2012.

To win the High-Deluxe, 5-Star-Plus, Large Ship category, WOCLS says that “for the same prices being charged by other cruise lines, simply put, Holland America provides an ambience and a level of service, across its entire fleet of ships, which exceeds the other cruise lines in this category.”