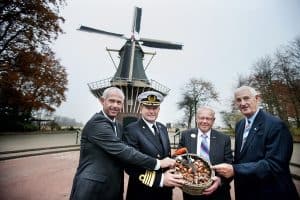 Holland America Line is partnering with the world-famous Keukenhof Spring gardens in the Netherlands to develop an exclusive tulip for Holland America Line in celebration of their 140th anniversary in 2013.  Master grower Jan Pennings, exhibitor at Keukenhof Gardens, chose a white-petaled variety to honor the company that was originally founded in Rotterdam on April 18, 1873, as a trans-Atlantic cargo and passenger company.

To launch the planting of the new tulip, which will be harvested next spring, Jan Pennings will hand over the first bulbs to Holland America Line Captain Edward van Zaane; Nico Bleichrodt, Senior Director of Sales, North and Central Europe; and Martin Schröder, loyal Mariner and member of the Holland America Dutch advisory board.  The event took place on Nov. 16, 2012 by a windmill that was donated to Keukenhof Gardens by Holland America Line in 1957. The tulips are scheduled to bloom in spring, 2013.  An official christening and naming of the new tulip will be held in April, 2013 at Keukenhof.

Known as the Garden of Europe, Keukenhof is the world’s largest flower gardens, situated near Amsterdam, in the Netherlands.  Approximately seven million flower bulbs of 1,600 varieties are planted annually at the park. The Keukenhof is only open for two months per year, from March 21 through May 20, and attracts more than 800,000 visitors from around the world. For more information visit: https://www.keukenhof.nl.