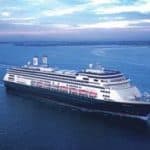 Holland America Line’s ms Oosterdam and ms Volendam will return to Australia, New Zealand and the South Pacific islands for the 2013-14 season with a series of sailings that will visit more than 50 ports of call. During the voyages, guests will have the opportunity to experience the region’s incredible wildlife on land and in the sea, including Australia’s legendary Outback and the world’s largest coral ecosystem, the Great Barrier Reef, during a complete circumnavigation of the continent.

The Volendam’s 34-day Australia Circumnavigation. This voyage is round-trip from Sydney Oct. 20, 2013, and features more than 20 ports as well as scenic cruising in the remote Ribbon Reef and Far North Regions.

Holland America has a total of 15 ships on seven continents.