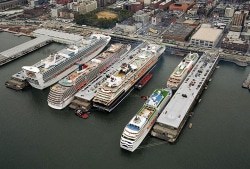 With the onset of Hurricane Irene, the term ‘weathering the storm’ rings true for one Holland America ship. The 719′ 1,350-passenger ms Veendam will dock at a NYC pier overnight tonight and Sunday, leaving Monday for Bermuda.

The ms Veendam is scheduled to arrive at the Manhattan Cruise Terminal later this morning. “Guests who desire to leave Saturday morning in advance of the storm will be able to do so. For guests who overnight until Sunday, the ship will remain in port. These plans have been approved by the United States Coast Guard and the New York City Mayor’s Office,” said a spokesman for the cruise line.

The ship is currently scheduled to leave New York on Monday at 2pm.

Late Friday, aviation officials made the decision to shut down the major airports to arriving flights at noon today. The city stated they’ll be shutting down subways and buses at noon, too.

According to StormPulse.com, Hurricane Irene’s outer bands are expected to reach the New York City later today and last throughout late Sunday. Wind gusts could be as high as 80 mph.

Did Holland America make the right decision? Share your thoughts below.