Holland America Line took delivery of ms Koningsdam today, March 31, 2016, officially making it the first Pinnacle-Class ship in the fleet. The signing ceremony took place at Fincantieri’s Marghera shipyard in Italy. Following the signing, the Dutch flag was raised on the ship for the first time. Koningsdam is registered in the Netherlands. 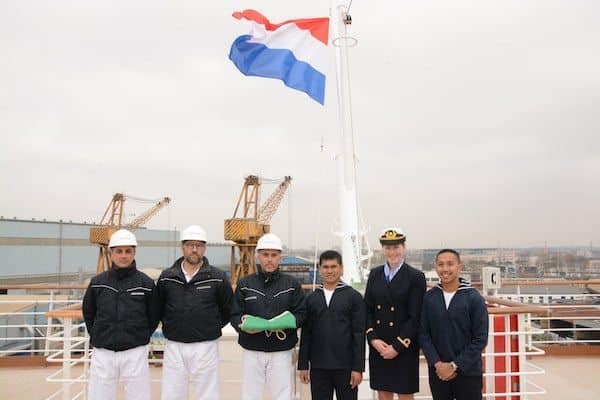 The ship will soon make its way to Civitavecchia (Rome), Italy, for its Premiere Voyage departing April 8. Following a series of premiere Mediterranean voyages, Koningsdam’s official naming ceremony will take place in Rotterdam, the Netherlands, on May 20.

Following the naming festivities in May, the ship will head to its summer home port of Amsterdam, the Netherlands, and sail a series of northern Europe and Baltic cruises before returning to the Mediterranean in September. In the fall, the ship will head across the Atlantic Ocean to Fort Lauderdale, Florida, where it will homeport at Port Everglades and spend the season exploring the Caribbean.