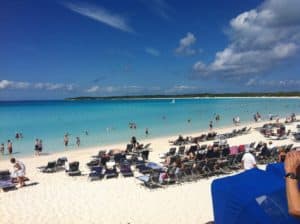 We arrived in Half-MoonCay,Bahamas around 7:45am and dropped anchor where we were joined by another HAL ship ms Westerdam. The tender process was pretty straight laced. We had to go to the Queen’s Lounge, get a tender ticket and then wait for our tender number to be called. The process from getting our ticket to getting on-shore was about 30-45-minutes. When we arrived on HMC it was an awesome sight with white sandy beaches and plenty of room even with two ships in port. The island is 2,400 acres with only 45 acres developed.

I didn’t do an excursion this time but there’s a lot to do there from renting jet skis, swimming with the sting rays to renting a cabana beachside. I went straight for a walk and passed a horse riding excursion where people were in the water with the horses. Not being a huge person of just baking in the sun, I pulled a chair under a tree and listened to my iPod. Lunch was served around 11:30 in the main BBQ pavilion area. It seemed a little cramped with two ships in port but the servers also put the food on your tray there, so that made things a little slower. When I was on HMC on Carnival Fascination last year, I didn’t remember that.

I stayed on HMC for about three hours and went back to the ship, or so I thought I was going to. When I grabbed my wallet out of my friend’s bag, I forgot to make sure my ship card was in there – it wasn’t. I had to walk all the way back and get my card before heading BACK to the ship tender boats again. The ride back was a breezy 15-minutes and then we were back on the ship. They don’t do a security check point with the X-rays when you get back on the ship from HMC because they search your bags on the pier and there’s really nothing that you could bring on the ship.

Back on the ship I went to the Explorations Café where they have lots of library books, computers, and a sitting area called the Crow’s Nest. The café is powered byt the NY Times. Everywhere you go you see NYT screen savers on the computers and print outs of the daily news. All good stuff.  I found a John Grisham book that I haven’t read yet so settled in a reclining chair until sail away. This was the first time I’ve ever really walked into a ships library. The ship staffs a librarian and has an extensive selection of books. I was impressed.

I still think internet on a ship is the biggest racket. $100 for 250 minutes. It’s crazy how the prices change from ship to ship. When I was on MSC a couple months ago, the price was 13-cents a minute. Last week on Costa Atlantica it was $24 for three hours. In comparison you could buy 12 hours on Costa for the same prices as four hours on this ship. I’m thinking we should all buy some stock in MTN (company who runs the internet on the ship). 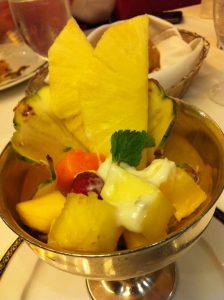 Dinner was in the main dining room and I went with the Caribbean jerk chicken, French onion soup, and a fruit plate for dessert. If I keep eating desserts my ass is going to be as big as a house. Since we have anytime dining we dine on deck two and the past couple nights we’ve eaten alone. We did make reservations for Canaletto (Italian venue), Pinnacle Grill (lunch $10 and dinner $25), and Le Cirque (held once this cruise). More on that to come..

After dinner we checked out the show of multiplatinum artist Journey South. The brother duo opened with a trio from their longtime music idol Billy Joel and continued to delight crowd with classic favorites from Elton John, Van Morrisson and Michael Bublee. Yet, the highlight is when they performed acoustic and played songs form their albums including one they originally wrote. Their life was a dream come true from their humble beginnings in New  Castle,England and they shared their story of how they received a chance after years of struggle through the Simon Cowell hit show “The X Factor.” A very inspiring story added emotion and excitement to the music.

Tomorrow is a day at sea as we head toArubaand I plan to hit the gym pretty hard. If the food consumption keeps up there will be no weight loss on this cruise.