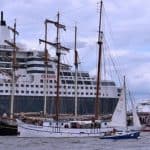 In the course of the flagship’s 200 Transatlantic Crossings, Cunard estimates that passengers have consumed:

In total, Queen Mary 2 has served 22.4 million meals and sailed over 600,000 nautical miles during her first 200 Crossings.  These figures do not take into account her annual World Cruise or her sailings to the Canaries, Fjords, Iceland, Belgium, the Netherlands, Luxembourg, around Britain, up to Montreal and Quebec in Canada, or among the Caribbean islands.

Transatlantic Crossings aboard Queen Mary 2 offer time to leisurely explore the ship’s extensive on board amenities and activities, including lectures through the award-winning Cunard Insights programme; stargazing in the only planetarium at sea; white-gloved afternoon tea served in the Queens Room or a spin around the dance floor during a Royal Nights themed ball; taking in a performance or workshop by members of the Royal Academy of Dramatic Art; or perusing 8,000 volumes in the largest library at sea.

Holland America, Another Chef in the Kitchen