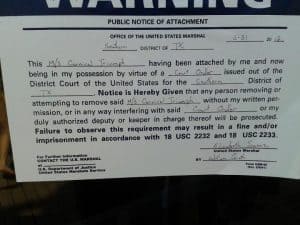 Sticker on the outside atrium windows on Deck 10 aboard Carnival Triumph.

Updated 6:00 pm ET — Per John Heald’s Facebook page, “We have reached agreement on this matter and are expecting the US Marshals to release the ship very soon. The safety briefing has commenced and we should be sailing shortly.”

Miami, Florida –The matter involving the Carnival Triumph has been resolved and the ship has just departed on its scheduled five-day voyage. The ship will operate its normal itinerary with stops in Progreso and Cozumel, Mexico. While the matter was pending earlier today, guests were allowed to board the ship as normal and enjoy its many outstanding features and facilities.

Carnival Triumph is based year-round in Galveston, Texas and operates four and five-day cruises to Mexico.

According to Bloomberg news a Texas judge ordered that Carnival Triumph be held in Galveston, Texas on Saturday stemming from a $10-million lawsuit involving a death of a guest aboard Costa Concordia this past January. Carnival Corporation owns Costa Cruises and Carnival Cruise Lines.

Senior Cruise Director John Heald published this on his Facebook page Saturday afternoon, “Just spoke to the CD [Cruise Director] on the ship [Carnival Triumph] and embarkation has started and is proceeding as normal.”

A statement issued by Carnival Cruise Lines said, “We are aware of the situation and are working through the appropriate legal channels to resolve it. The litigation in question relates to a matter that involved a European-based cruise line that is a sister line to Carnival Cruise Lines. We are optimistic that the issues regarding the Carnival Triumph will be resolved and the ship will depart on its scheduled voyage later today.”

At this time it looks like the 2,758-passenger Carnival Triumph is scheduled to sail as normal.

Related Topics:Carnival Triumph detained
Up Next

Azamara ship makes it to land after fire, guests disembark