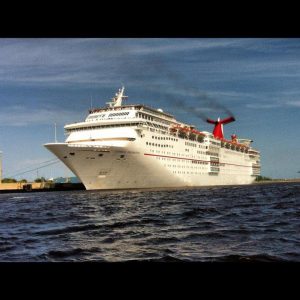 A security guard aboard the ship reported that he saw the 31-year-old male jump from the 10th deck into the water, a fall that is approximately 87-feet.

Crewmembers aboard the Carnival Fascination reported the incident to watchstanders in the Coast Guard Sector Jacksonville command center at 2:09 a.m., Tuesday via VHF-FM marine radio channel 16. The Coast Guard dispatched four rescue vessels and one Jay Hawk helicopter at assist.

Carnival spokesman told us, “Carnival Fascination was released from the search by the U.S. Coast Guard earlier this morning however the U.S.C.G.  is continuing the search and rescue effort.  Carnival’s CareTeam is reaching out to the missing guest’s family to offer support.”

The man is still reported as missing.

Port of New Orleans Shuts Down, No Cruises Affected