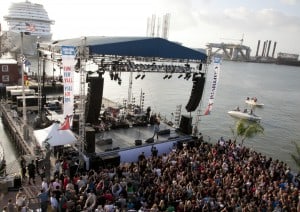 Senior Cruise Director John Heald took the stage around 4p to welcome the crowd and warm up 4,000 fans. Heald, told the crowd that Galveston is one of Maroon 5’s most memorable performances in their career because “the Texas crowd shows up and shows up strong.”

With the back drop of Carnival Magic, Maroon 5 opened the show with their chart topping single “Moves Like Jaggar” followed by some of their classics and some new songs from their latest album “Hands All Over.” The performance lasted about 75-minutes and had everyone everyone singing word for word. Their encore, “She Will Be Loved” brought the crowd to a roar.

While in Galveston, Maroon 5 was welcomed aboard Carnival’s news ship that included a tour of the navigational bridge and checked out the Caribbean-inspired Red Frog Pub.

You can hear our broadcast  from Pier 21 in Galveston, Texas here.

6 Cool Things to do in Galveston