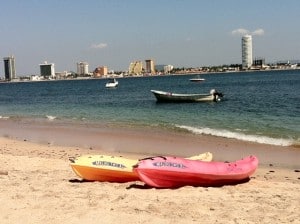 Holland America and Norwegian Cruise Line have confirmed their return to the port of Mazatlan, with at least 10 arrivals in the remainder of 2013, and between 25 and 30 arrivals more just in the first half of 2014. Azamara Quest is also scheduled to call to the port in January 2014.

HEAR OUR BROADCAST FROM MAZATLAN.

The Secretary of Tourism explained that the State of Sinaloa was committed to working with both cruise lines in the promotion and publicity of Mazatlan in the United States.

Holland America and Norwegian officials expressed that the problem of perception of crime still remains, but that if they are working on promotional campaigns and efforts to further reduce the crime rate.

“We have to take care of the port and make more tourist proposals. We are going to put together sales and marketing programs. Boats come filled and it would be fabulous if more arrivals of cruise ships are accomplished,” the Secretary of Tourism expressed.

Cruise traffic in Mazatlan dropped significantly after the U.S. State Department issued travel alerts to Mexico because of violence from the Mexican Drug Wars.

Here’s a video shot in Mazatlan in 2012 about the decrease in cruise ship calls: