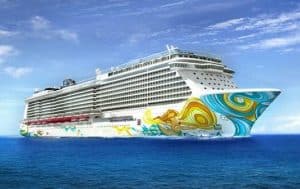 “Norwegian Getaway will be Miami’s ship and, therefore, we wanted to ensure that her hull was designed by an artist with strong ties to Miami and the Latin community,” said Kevin Sheehan, Norwegian Cruise Line’s chief executive officer. “Having begun his career in South Florida, Dave is an artist that is entrenched here. His work adorns the city and I’ve learned that he is also a genuinely nice guy.  He is a shining star in Miami, as well as the global art community.”

Born in New York City in 1972 to Cuban émigré parents, LEBO was raised in South Florida and was heavily influenced by Miami’s Cuban art scene.

According to LEBO, Norwegian Getaway’s hull art design is centered on a mythical mermaid, an iconic image that represents humanity’s connection to the sea, and features her seemingly skimming across the surface of the water.  Surrounding the mermaid is a fusion of sea and sky dancing across the ship, where three pelicans gracefully glide along in the artist’s version of a tropical paradise.

Don’t forget to subscribe to our Cruise News Updates.