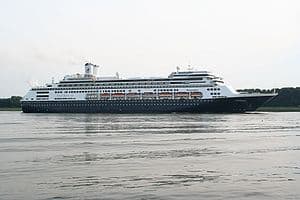 Holland America Line is expanding its culinary offerings with the debut of a new alternative dining option exclusively aboard ms Rotterdam called “Taste of De Librije” featuring the cuisine of Culinary Council member and Michelin Three Star Chef Jonnie Boer. Named after Boer’s restaurant in the Netherlands, the menu will showcase a selection of starters, soups, entrees and desserts from his land-based eatery.

Once per cruise the Pinnacle Grill will be transformed with service staff wearing the uniform livery from De Librije, the restaurant’s table set-up will be replicated and the wine list will highlight a selection of labels from the Lady De Librije collection. Reservations can be made for “Taste of De Librije” for a US $69 surcharge per person including wine parings.

“De Librije is one of the finest restaurants in the world, and we are thrilled to highlight Jonnie’s recipes onboard ms Rotterdam,” said Richard Meadows, executive vice president, marketing, sales and guest programs for Holland America Line. “Not only will our guests enjoy Three Star Michelin cuisine, but they will also get a taste of the truly unique De Librije dining experience.”

The five-course menu starts with an amuse bouche of North Sea Scallops served to all diners. From there, guests can select from among three appetizers, two soups, four entrees and three desserts. The tantalizing dishes include Oysters on the Beach, oysters and micro greens; Chilled Tomato Gazpacho with black olive and celeriac mousse; Venison Loin and Beef Tenderloin with bulgur wheat and smoked olive oil foam; Duo of Lamb Loin and Crusted Lamb Neck with lentil sprouts, watercress, carrot coulis and lamb jus reduction; Deconstructed Apple Pie with vanilla gelato and Chantilly-style cream; and Rice Chocolate Stones with tuile and strawberries.

When guests return to their stateroom following the dining experience, they will find a Jonnie Boer surprise gift.

Boer is a star of the Dutch culinary scene. In addition to being a member of Holland America Line’s esteemed Culinary Council composed of five international chefs, he is chef and co-owner of Michelin-rated De Librije Restaurant and De Librije Hotel in Zwolle, Netherlands. Boer holds the Relais & Chateaux grand chef designation.