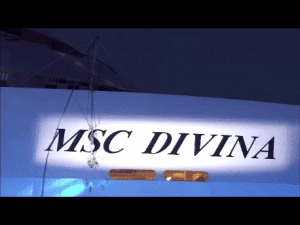 The 12th cruise ship in the MSC Cruises fleet was officially christened in Marseille, France on Saturday by godmother Sophia Loren.

Gerard Depardieu, one of Europe’s most accomplished actors and talented leading men, narrated the events and the story of MSC Divina. Also in attendance were numerous international stars, including classical performer and UNICEF Goodwill Ambassador Maxim Vengerov, as upporter of the joint MSC Cruises and UNICEF “Get on Board for Children” initiative which funds a project for education equality for disadvantaged children in Brazil that has raised more than $1.3 million to date. Vengerov took to the stage with local children and released hundreds of UNICEF balloons and delighted guests with a violin solo.

The highlight of the evening was the floodlit ceremony and parade of the ship’s officers, when Sophia Loren – godmother of the MSC Cruises’ fleet – cut the ribbon and named MSC Divina to a crescendo of champagne, confetti, and sparkling fountains.

MSC Divina will spend the summer inter-porting in the Mediterranean on seven-night cruises.

You can view more photographs of the christening on our Facebook page.