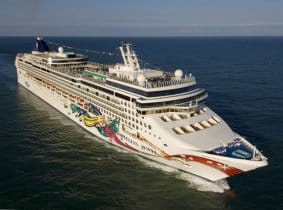 MIAMI – February 1, 2012 – Norwegian Cruise Line announced today that it is seeking the help of parents and kids to name its new Youth and Teen programs.  The company today launched the “Up2YOU” naming contest inviting cruisers to submit names for the company’s youth and teen programs, along with names for each of the new age groups.

The contest runs from today through February 13, 2012 and the winners who name the new kids or teen program will receive a seven-day Caribbean cruise for a family of four. Those who submit the winning names for the six age groups within the new programs will receive a $100 American Express gift card.  Norwegian announced earlier this month that it is revitalizing its current youth program and will implement a new best in class program fleet wide beginning on Norwegian Gem in mid-February and rolling out to all of the line’s Freestyle Cruising ships subsequently.

“We want to ensure that we have the best youth programs at sea for the more than 150,000 children and teens that sail with us each year,” said Kevin Sheehan, Norwegian Cruise Line’s chief executive officer. “In the spirit of Freestyle Cruising, we thought that the parents and kids who utilize the programs would be the best to suggest names for them.  We are looking for lots of originality and creativity along with names that really speak to today’s kids and teens.”

To enter, contestants should head to Norwegian’s website, fill out the online entry form and submit name options for one, any, or all of the following:  the new Kids program; the new Teen program; and the six new age groups:  six months to two years old; three to five years old; six to nine years old; 10 to 12 years old; 13-14 years old; and 15-17 years old.

There is no maximum amount of entries per person. The contest is open to residents of the United States and Canada (excluding Quebec) 18 years of age and older or, for entrants who are younger than 18, their entries can be submitted by a parent or guardian on the entrant’s behalf.

For more information on how to enter and for the official rules and details on the prizes, visit Norwegian’s website.