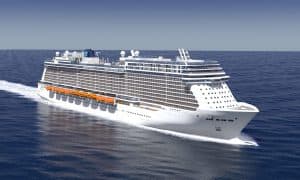 Norwegian Cruise Line announced today that it has confirmed an order for a second “Breakaway Plus” cruise ship with MEYER WERFT GMBH of Papenburg, Germany for delivery in spring 2017.  Along with the first Breakaway Plus ship, which is scheduled for delivery in October 2015, these two new vessels will be the largest in the line’s fleet at approximately 163,000 gross tons and 4,200 passenger berths each and will be similar in design and innovation to the line’s current Breakaway class, the first of which, Norwegian Breakaway, launched in New York in early May.

The combined contract cost of the two Breakaway Plus class ships is approximately €1.4 billion. The company has export credit financing in place that provides financing for 80 percent of the contract price.