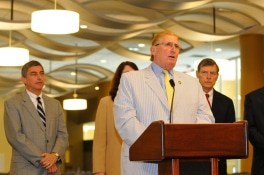 Lt. Gov. Jay Dardenne joined the Board of Commissioners of the Port of New Orleans in the dedication.

Lt. Gov. Jay Dardenne joined the board of Commissioners of the Port of New Orleans earlier this week to dedicate the newly remodeled Julia Street Cruise Terminal. The $20.1-million project took the two smaller cruise terminals and joined them as one, making room for larger cruise ships and handling more cruise passengers.

“The growth of cruise activity at the Port of New Orleans has added a new dimension to Louisiana’s tourism offerings,” said Louisiana’s chief tourism official.

Currently the Julie Street Cruise Terminal serves as a homeport for Royal Caribbean’s 3,838-passenger Voyager of the Seas during the winter season. The terminal next to Julie Street is Erato Cruise Terminal which has year-round 4-,5- and 7-night sailings from Carnival Cruise Line. Both terminals are located downtown, a mile from the French Quarter.

The port of New Orleans is expected to close out 2013 with 1 million cruise passengers.