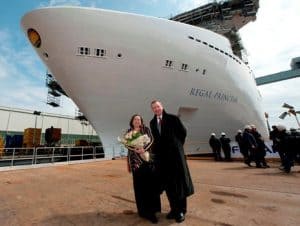 Regal Princess met the water for the first time in a traditional shipyard ceremony. Photo: Princess

Regal Princess reached a significant construction milestone today when the Princess Cruises vessel was “floated out” at its building dock at the Fincantieri shipyard in Italy. A traditional ceremony marked the occasion as the ship met the ocean for the first time.

Following the Italian shipyard’s custom, the float out of a ship begins when a “madrina,” or godmother, cuts the cord that begins the flow of water into the ship’s building dock. Carolyn Spencer Brown, editor in chief of Cruise Critic, served in this role to begin the two-day process of setting the ship afloat.

“To mark this important milestone we selected a woman who lives and breathes the cruise industry,” said Alan Buckelew, president and CEO of Princess Cruises. “Carolyn has been the editor-in-chief for Cruise Critic for 10 years and not only is she a champion of cruising, she’s helped to build an avid community of cruisers. Her passion for cruising made her the perfect choice to serve as madrina for our new Regal Princess.”

Once afloat, the ship will be moved to the outfitting dock where final construction and interior outfitting will take place. Regal Princess, a sister ship to the soon-to-debut Royal Princess, will debut in June 2014 with a season of Mediterranean cruises.

Oasis of the Seas Sails Europe in 2014, Briefly