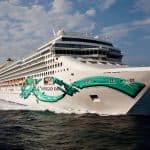 It happened in Jacksonville, Florida during the 2005 Super Bowl, and now happening with Sochi, Russia during the 2014 Winter Olympics. The use of cruise ships as floating hotel rooms.

According to a Russian news source, “The General Director of Svoi TT Sergei Voitovich announced plans for the conversion of seven cruisers with a one thousand-passenger capacity into floating hotels for the duration of the Sochi Winter Olympics (5–25  February 2014). Svoy TT is a tour operator that brings foreign tourists to Russia and is a member of the international travel group TUI Travel.”

Norwegian Cruise Line’s Norwegian Jade has been confirmed. Passengers who were scheduled on the year-round Norwegian Jade are being offered an on board credit for sailings between January 29 and March 4, 2014.

It has also been confirmed that a Costa ship will be used, though the ship hasn’t been revealed. The Costa ship has 12 decks and 726 cabins