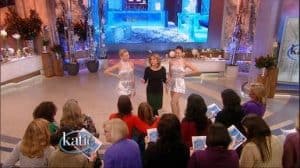 Norwegian Cruise Line has invited all audience members and their families from today’s episode of Katie Couric’s talk show, Katie, onboard the exclusive inaugural sailing of the line’s newest ship, Norwegian Breakaway, over Mother’s Day weekend, May 10 – 12, 2013.

In the “Katie Gives Back: Holiday Extravaganza,” the talk show’s audience included 150 New York-area mothers who have been affected by Hurricane Sandy.  During the grand prize giveaway, Norwegian Breakaway’s godmothers, the legendary Rockettes®, presented the audience with the cruise giveaway which will include a weekend of spectacular dining, entertainment and fun, as the best of New York sails to sea aboard Norwegian Breakaway.

“As a New Yorker, I know firsthand the kind of damage Hurricane Sandy inflicted on this area,” said Kevin Sheehan, chief executive officer of Norwegian Cruise Line. “We are so pleased to offer these deserving families a chance to relax and reconnect during our exclusive inaugural sailing of Norwegian Breakaway, to experience the luxury, incredible amenities and wonderful service that New York’s ship has to offer.”

Setting sail from her year-round homeport of New York City in May 2013, the 4,000 passenger Norwegian Breakaway is the most-anticipated new ship of 2013. The ship will arrive in New York on May 7, 2013 and begin weekly summer seven-day cruises to Bermuda on Sunday, May 12, 2013.  From October 2013 through April 2014, New York’s ship will offer voyages from the heart of Manhattan to the Bahamas & Florida and the Southern Caribbean.