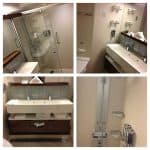 Social media was HUGE on Norwegian Breakaway, in fact according to MTN, Norwegian Cruise Line had hundreds to thousands of views to their Facebook, Twitter and Instagram pages during their two US inaugural sailings.

With that said, one of the biggest questions we got while on board Norwegian Breakaway was: Are the bathrooms anything like Norwegian Epic?

The answer is no.

The waves design cabins and the separate bathroom layout that was found on Norwegian Epic is non-existent on Norwegian Breakaway.

Below are two videos.