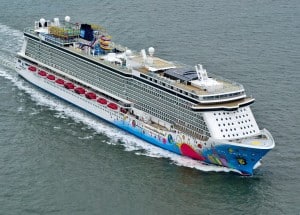 Norwegian Cruise Line announced today that their newest ship, Norwegian Breakaway, successfully completed her technical and nautical sea trials which took place off the coast of Norway and Denmark. Over the course of several days beginning on March 25, Norwegian Breakaway underwent a series of stringent tests to assess various nautical and technical elements, including the ship’s speed, maneuverability, and more.

In order to assess the ship’s speed, the Captain, navigational officers and representatives from MEYER WERFT tested all of the various power outputs for the propellers. The speed was then adjusted to various levels at each power output level. Every speed test that Norwegian Breakaway underwent was successful and exceeded the required technical specifications.

To demonstrate the agility of the ship, Norwegian Breakaway performed a “Williamson’s Turn,” to determine how well the ship would be able to turn around in the event of an on board emergency, the “zig zag,” a crash test, a turning circle and tested vibrations.

Norwegian’s nautical team reported that the conditions for Norwegian Breakaway’s sea trials were extraordinary, and that the ship successfully completed all of the very important tests and trials that were conducted.

Norwegian Breakaway sails her first seven-day Bermuda sailing on May 12 from NYC.

Shorter Cruises for Queen of the Mississippi