Our day started at 3:30 am, waking up for our 6am flight. Leaving out of Jacksonville it is pretty simple but with all the TSA delays and such — arriving at 90 minutes before your flight isn’t a bad idea. We flew Jet Blue for this trip (one free bag). We boarded the flight, wheels up and landed at JFK an hour and forty-five minutes later. Not a bad flight at all. The tickets were only $59 each way from JAX-JFK.

A big question that is always asked when cruising out of New York is: How to get to downtown or the cruise port from JFK? In the past I have spent and arm and a leg because I never researched it. My friend Craig from Stay Adventurous lives in the city and turned me on to the public transit system.

I am always looking for the most economical way to travel so I did public transportation from JFK to 42nd street in Manhatten. So how did it work? After we checked our bags we went upstairs and caught the AirTrain to Jamaica Station (cost $5). From Jamaica Station you take the E into the city ($2.50). We boarded the transit around 9a and were dropped off at 42nd street around 9:35a.

If you’re going to be taking the metro to a lot, you may want to consider buying their unlimited pass for $30 for seven-days. We are only spending three full days in the city but each time you get on it is $2.50, so it adds up. When we get back from Norwegian Breakaway we are going to have an action packed day in NYC. 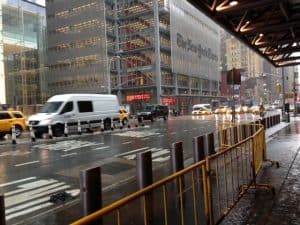 Arriving into the city from the metro.

A flat rate from JKF into Manhattan and vice versa is $52, plus any tolls. If you have a big family it maybe worth taking a cab but if it’s just the two of you, I’d highly recommend the subway. There is also an app called Kick Map that’s available for free and shows you a detailed layout of the NYC Metro system.

We did a pre-cruise hotel stay at the InterContinental Times Square (review and video coming soon). The subway exit is literally right next to the hotel so you can pop up and walk right into the hotel. We got into the city a little before check out time but the hotel let us store the bags and use the lounge to get some work done. They were very accommodating and you couldn’t ask for a more central location.

While we were waiting we walked a block over to a local diner in Hell’s Kitchen called WestWay Diner. They had the best bagel and lox I’ve ever had.

In the past when in NYC I’ve always done shows, tours, tapings, a train to Coney Island and a C-Line island tour. This time I wanted to see if I could keep myself occupied on a budget. I went to Rockefeller Center to check out a Today Show taping, walked around Times Square, went to the decommissioned USS Intrepid to take some photos and I watched Carnival Splendor leave from the pier on 12th Ave.

There are also some really cool trendy bars in the Hell’s Kitchen area that had some great Happy Hour specials (half price of normal drink prices). Don’t be suckered into thinking that you have to eat in the Times Square area – find a restaurant or a diner with one of the many apps out there or pre-plan through Trip Advisor. One thing New York City is known for is great food and great lunch specials. For lunch I grabbed a filling thai meal for $6.95.

Our next installment will be all about Norwegian Breakaway.