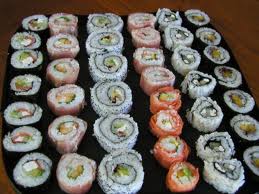 To give passengers even more of a Freestyle dining experience, Norwegian Cruise Line is rolling out their brand new sushi menu to ten out of the eleven ships in the fleet. Already released on Norwegian Epic, passengers will be able to choose from sushi, sashimi, light appetizers, and desserts will now be offered as a lunch option on embarkation and sea days.

According to a release issued by the company, “Guests can select from a number of different appetizers such as edamame, miso soup, or sesame seaweed salad. Sushi selections include such favorites as the Godzilla roll, a tasty roll with sweet shrimp, mango, avocado, caramelized cashews, and coconut; and the Dynamite Roll with yellowtail, salmon, green onion, maki tempura style. Guests can also complete their meal with a dessert like green tea cake or fruit sashimi.”

Miami based Norwegian Sky will be the only ship not serving the sushi menu.

Port of Galveston a draw for cruise lines; 3 new ships for 2011