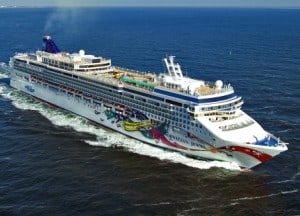 Norwegian Cruise Line and the Port of Houston Authority announced today that they have reached an agreement for Norwegian to sail seasonally from Houston for three years, totaling 75 calls, with an option to extend for up to two years.  Beginning in the fall of 2014, Norwegian will bring the 2,374-passenger Norwegian Jewel to Houston to sail seven-day Western Caribbean cruises. The line’s return to Houston marks the first time Norwegian has had a ship sailing from the city since Norwegian Dream in 2007.  Economic activity from the cruise line each season is expected to generate $50 million* annually, including local purchases of $3.6 million. A total of 222 jobs will be touched, including the creation of almost 100 new jobs. An estimated $941,000 in state and local taxes is anticipated.

“With the growth of our capacity from the upcoming additions of our two new ships — Norwegian Breakaway and Norwegian Getaway, we can expand our existing fleet into new homeports,” said Kevin Sheehan, Norwegian Cruise Line’s chief executive officer.   “We listened to the feedback from our travel partners and guests who have been requesting our return to Houston. We are also going back in a big way by sending one of our Jewel-class Freestyle Cruising ships to their very impressive new cruise terminal.”

“The Port of Houston Authority is elated that Norwegian Cruise Line has agreed to return to Houston and sail from its state-of-the-art cruise facility located in Pasadena, Texas,” said James T. Edmonds, Chairman of the Port of Houston Authority Commission. “Norwegian’s presence plays a critical role in Port-related activity, as well as the greater Houston’s tourism industry. We eagerly anticipate Norwegian’s Jewel’s arrival in 2014, when the Port of Houston celebrates its 100th anniversary, and look forward to a long and successful partnership.”

The Bayport Cruise Terminal located in Pasadena, Texas is just outside of Houston is an exciting home port city for cruise travelers looking for efficient and world-class services before and after their cruise.  It is conveniently accessible to both major Houston airports.  The 96,000-square-foot state-of-the-art facility combines visual appeal, passenger convenience, accessibility and innovative security systems. Passenger access from parking and drop-off areas is immediately adjacent to the front of the terminal. Covered walkways connect the building to bus and private passenger drop-offs and taxi stands. Once inside the terminal, passengers’ first-class experience continues in the expansive great area. The cruise terminal’s proximity to fine restaurants and hotels make it an ideal point of disembarkation.

MSC Cruises Transforms On Board Buffet