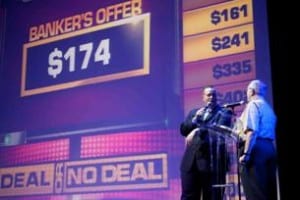 “Deal or No Deal” on a ship near you.

MIAMI – February 28, 2012 – Norwegian Cruise Line is introducing the hit game show “Deal or No Deal” to its fleet of Freestyle Cruising® ships. The line has partnered with TimePlay, a world leader in multi-player interactive technology and content, to bring this highly interactive and fun game show to the high seas. The popular show challenges contestants to play and deal for prizes in a high-energy contest of nerves, instincts and raw intuition. “Deal or No Deal” is currently offered twice per cruise on all Norwegian ships (except Pride of America).

Based on the successful television format that has aired in more than 50 countries, the on-board rendition uses content from the show and allows everyone in the audience to participate in real time to win prizes, playing along with the randomly selected contestant who has the chance to win cash. True to the television series, players will be confronted with sealed briefcases full of varying prize values.  Without knowing the prize value inside, the contestant has to decide whether to keep the case until it’s unsealed at the end of the game. The pressure mounts in each round and after a pre-determined number of cases are opened, the participant is tempted by the mysterious “Banker” to accept an offer in exchange for what might be contained in the contestant’s chosen briefcase in which they will have to decide whether to make a deal or exclaim, “No deal!”

For a chance to beat the banker and win exciting prizes, guests participate as a randomly selected contestant or play along as an audience member for $19.95 per person. Audience prizes range from a seven-day cruise to cash and on board prizes. Guests should consult the ship’s Freestyle Daily once onboard for exact times and locations.