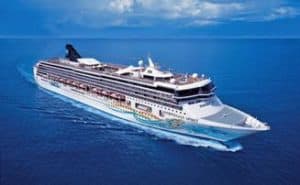 November 13, 2011 sailing from New Orleans. For the first time in the tournament’s 17-year history, it will take place on board a cruise ship, boasting the largest prize offered at sea for a slot tournament – $1,000,000.

The high-stakes match consists of 263 finalists, who have won spots in the exclusive competition from prior land-based and at sea satellite slot tournaments.  Each player will have sessions on different slot machines to earn points. Following the sessions, the scores will be combined and the top 30 players will win cash prizes.  The finalist with the highest score will win $1,000,000*.

The partnership between these two industry leaders – Norwegian Cruise Line and Caesars Entertainment — has brought this slot tournament finale to an exciting new level. “Gaming has always been a highlight at Norwegian Cruise Line. With the Millionaire Maker Slot Tournament finale, it has reached a new level of excitement,” said Jim Abbas, Norwegian’s vice president of casino operations.

Norwegian’s Casinos at Sea have been recognized as the “Best Cruise Line Casino” by readers of Casino Player magazine for 10 consecutive years. Norwegian owns and operates the casinos throughout its fleet; each casino is equipped with the most popular slot machines and table games. Guests who enroll in Norwegian’s Casinos at Sea Players Club can earn reward points, which can be used during a current cruise for a range of on-board amenities including spa treatments, shore excursions, dinners in specialty restaurants or towards a future cruise.